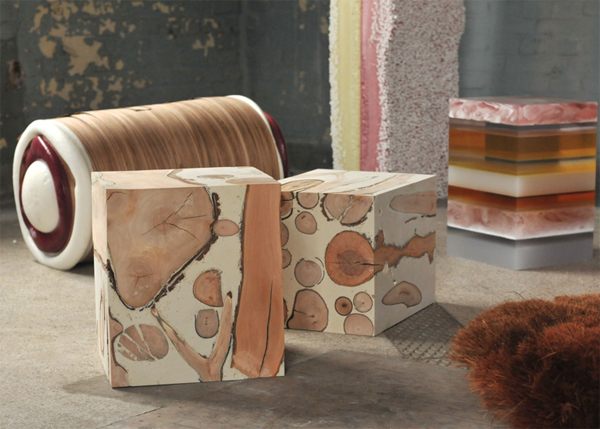 Three-piece ‘sweet’. Get it? Oh well, humour is all relative. Have a ‘butchers’ at this collection of photos showcasing Matthias Borowski’s oversized sweet furniture designs. Matthias Borowski is a design academy graduate of Eindhoven.

Matthias Borowski began considering the gap between product design and material choice that he sees developing as computer-aided design takes over from creating and refining real world prototypes. So he put forward the idea that every process necessarily changes the material in some way, and so its sensory impact. To investigate further into the subject, Matthias Borowski turned to food as cookery is an area in which processes are increasingly advanced and experimental. The outcome of cooking is geared towards sensory stimulation rather than pure biological function, and choice of material and its reaction to process is crucial in the overall effect. One of the project’s most passionate statements is that the design process should begin with and be shaped by material choice, rather than choosing it at the end of development based on cost or manufacturing concerns. Which we certainly saw as food for thought.

To build these giant confections he experimented with a range of plastics and resins to achieve the right textures and colours, and chose plastics to tap into the idea of sweets often being made from artificial ingredients.

Even sitting on them will require a subsequent trip to the dentist!