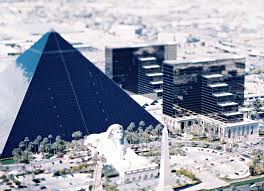 When it comes to capturing the distinct flavour of a city, no one does it quite like Olivo Barbieri. The Italian photographer has devoted much of his career documenting, from above, the rise and sprawl of cities from Las Vegas to Shanghai. In celebration of a decade’s work,  Olivo Barbieri has compiled these unique glimpses into the epic tome Site Specific, out in September (2013)

The book’s captivating dynamism is down to Olivo Barbieri’s unique take on the tilt-shift technique. From his aerial vantage point, he takes recognizable city landmarks and reorients them in a magical light. The infrastructure and architecture are accentuated to such a degree, they take on an intense hyperreality, inducing newfound awe.

The anthropological value in Olivo Barbieri’s work is undeniable, but his new book Site Specific, published by Aperture Books, also charts his technical development over a decade. Five years into the project, in 2008,  Olivo Barbieri began using post-production techniques to boost colour saturation and pixel structure. The influences of Giorgio de Chirico and Man Ray – to which he credits his graphic, abstract style – are most visible in the later images. As a result, those photographs toward the end of the book, dating as recently as 2012, are particularly memorable.

What are your favourite cities to photograph?  The downtown of American cities is most interesting to me, so it was important to have a series in Houston, Texas. The same for London. I was very interested in Battersea Power Station because of Pink Floyd LP ‘Animals’.
Why have you chosen to veer towards this increased abstraction in your work?  I have always been very interested in abstraction. I started using tilt/shift in 1999 and gave myself ten years to dig into it. I quit using the technique for the Site Specific series in 2008. In the beginning I was interested in transforming bits of cities into a plastic model; it’s a virtual process to bring into question their planning. Then I decided to go beyond – to start from the drawing, the planning.

At what point did you decide to stop working on Site Specific?  I don’t know if it is finished. Ideally I’d like to add a few more cities: Beijing or Mecca, perhaps.

What is it about urban landscapes that fascinates you?   I’m interested in understanding how much the senses, whether physical or technical, factor into our perception. The challenge is to build a story that perceptually discloses the portrayed location, then to relate it to other locations, in order to draw a bigger picture that describes the shape of the contemporary city.

The book comprises 10 years of work. What aspects took up most of your time?
Post-production.

And what have you found to be most satisfying?
That in its 10-year lifespan the project has evolved from the depiction of the city into the possibilities in that depiction made available by technology.