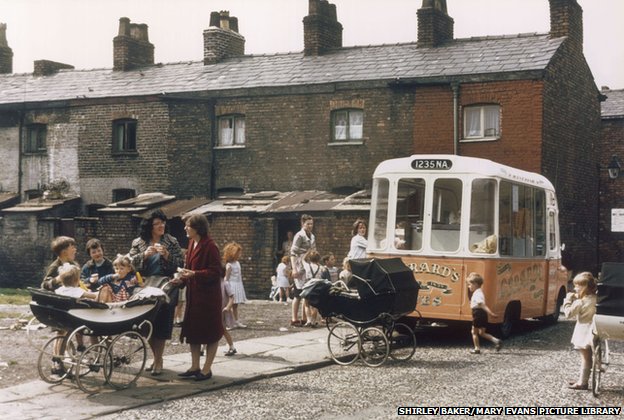 Photography is an important component of graphic design. That’s why Silvertoad always make it their business to stay interested in the world’s leading photographers. One of reportage photography’s leading lights, Shirley Baker passed away at few days ago (late September 2014).

Here is a selection of Shirley Baker work compiled by Tom Gillmor, of the Mary Evans Picture Library, who are guardians of her archive, pays tribute to her work.

“Shirley Baker first contacted Mary Evans Picture Library in early 2008. From looking through the first few printed pages she sent to me, featuring a mass of small contact photographs, I was immediately struck by a body of work of terrific quality and amazing potential. Shirley Baker’s work in Salford and Manchester (shot mainly between 1960 and 1973) captured a time of rapid social and economic change in the lives of working class people in Manchester and Salford,” said Tom.

Slum clearances, started in the 1930s, resumed in earnest in the 1950s, and in the twenty years between 1955 and 1975, around 1.3 million homes were demolished nationwide. When Shirley Baker began photographing the streets of her native Salford, it seemed that no-one was interested in recording the human story of these soon-to-be demolished communities. Old ladies sitting on doorsteps in a row of condemned houses, men with handcarts searching for refuse to be recycled, children playing inventively among rubble and abandoned cars. That she chose to preserve these moments on film, now seems like the only perceptive response to a vanishing environment.

Shirley Baker – A salesman in Hulme, Manchester, in 1965

Shirley Baker had an eye beyond that of the pure recorder of fact; she had an uncanny ability to spot incidental humour in the scenes of everyday life which surrounded her. The majority of her work needs no caption, as the emotions, energy and sense of place leap out from the scene. Later work – through the 1970s and 80s – moved geographically further afield but retained the same innate eye for quality of composition. Shirley Baker’s wider work as a writer and lecturer, has allowed many others a clear insight into her approach and technique.

From the moment the Mary Evans Picture Library began to make Shirley Baker’s work available to their clients, it has proved itself perfect for both editorial and creative purposes, offering humour, social history and the innocence and joy of youth, set against a backdrop of a rapidly changing world. Her work has appeared on book covers, music albums and in TV documentaries around the world, and even inspired a singer songwriter (who went on to use her work as a backdrop to his live performance).

“Speaking personally, it was wonderful to finally meet Shirley Baker face-to-face at her exhibition at the Salford Museum and Art Gallery in January 2012. She took great delight in my interest in the process behind the creation of the photographs, but was at the same time very humble and modest, preferring to hear my reactions to her work,” remembers Tom.  “She was always delightful to contact if a query regarding her work arose, and the excitement which always greeted an email popping into my inbox with a new scan of a recently-discovered image, will be greatly missed.”

Here is a selection of her work:

Shirley Baker – A real juxtaposition in activity on a Manchester park bench as an elderly lady in spotless Sunday best sits stoney-faced as two young boys have a real rough and tumble play at the other end.

Shirley Baker – A boy cycles through the washing in a terraced street in Salford, Manchester, in 1962.

Shirley Baker – Two young girls swing on a rope attached to a pavement lamppost outside a corner shop in Hulme, Manchester, 1965.

Shirley Baker – A young couple lean against a street sign with their arms around each other in Grange-over-Sands, 1968.

Shirley Baker – An elderly lady peers down the street from her perch inside a doorway in a row of terraced houses in Manchester. Two girls play football further down the street, close to a parked Morris Minor.

Shirley Baker – A terrific photograph showing the striking juxtaposition of a neat if stern elderly bus passenger framed in the window of the bus, set below an advert on the side of the vehicle depicting an angry punk.

Shirley Baker – A group of young people on the pavement in Camden, London., in 1989. The woman in the centre of the picture in swept back platinum blonde hair could come from any era from the 1950s to the present day.

Shirley Baker – Skinheads sit on a bench in a Wilmslow Park.

Shirley Baker – A stylish young lady in punk attire of black satin dress with spiked shoulder pads, wild white wig, heavy make-up and gold and silver bangles, stands on a Camden street as shoppers hunt for bargains in the market behind.