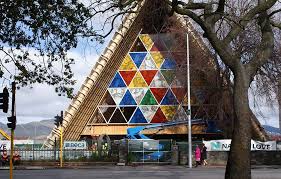 The structure, which uses thick cardboard tubes, temporarily replaces the one damaged by the 2011 earthquake until a permanent one can be built. The new building, designed by Japanese architect Shigeru Ban, is constructed from 600mm diameter cardboard tubes coated with waterproof polyurethane and flame retardants. It is intended to last 50 years.

Church officials say the completion marks a milestone in the city’s recovery efforts. They also claim the new cathedral is ‘one of the safest buildings in the city’, conforming 100 per cent to New Zealand‘s earthquake code for building construction.

The 6.3-magnitude earthquake badly damaged the old Christchurch cathedral, which was built in the late 19th century. Church officials admitted last March that it was beyond repair and had to come down.

“The old cathedral symbolised the city in many ways and we think this cathedral is a symbol that Christchurch is regrouping and rebuilding,” acting dean Lynda Patterson said. “The community has a cathedral again. It’s a place where people can come for quiet contemplation in the city centre and somewhere we can hold concerts and art exhibitions.”

Architect, Ban has established his reputation by designing emergency architecture for disaster zones from Rwanda to Japan, and he has described projects such as the cathedral as part of an architect’s social responsibility.