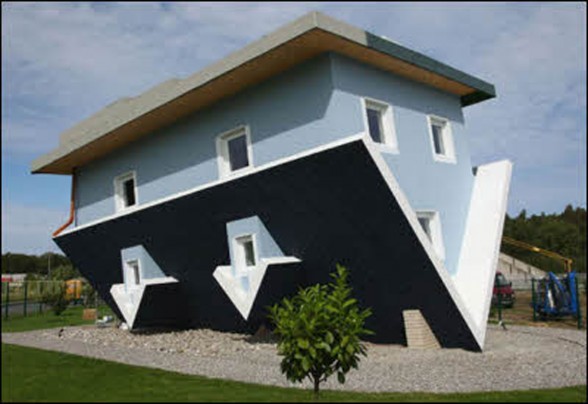 23 Apr Turning The House Upside Down
Posted at 07:28h in Humour / Puzzle by Toma Habashi

Ever heard the expression ‘turning the house upside down?’  It’s usually coined when you’ve lost something and torn the house apart looking for said item – car keys, slippers, fill in the blanks! Well this expression would be apt in just about every house you’ve ever seen except this one.

Silvertoad were impressed with this pretty blue house in Poland which in all senses and purposes is very much like a normal house except that everything is to be found positioned  opposite way up. It was designed and built Klaudiusz Voice & Sebastian and Mikiciuk with a brief that simply required them to design ‘something else.’  The project is maintained by Wonderworks who have several other inverted buildings situated around the world. We believe this is the only one that’s been designed as an abode though.

It’s currently situated in Poland next door to a popular museum and restaurant where diners can view the unusual inverted house. The designers state that it’s a statement against the rigidity of their former Communist masters of the last century.