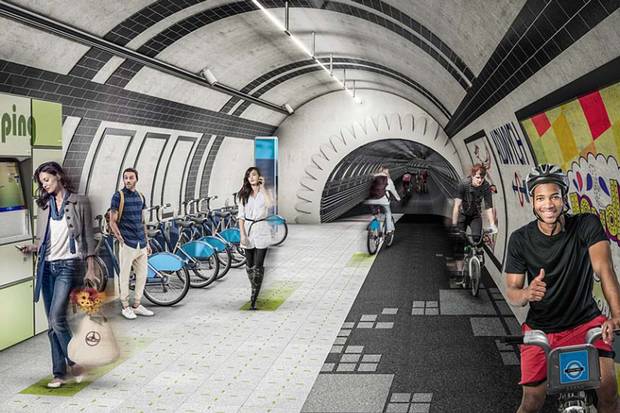 At Silvertoad, we have several cycling enthusiasts in our midst. Some of us like to compete, some of like to keep fit and others use it as a great mode of transport (brave souls on Luton‘s roads we’d say).  When we saw that there were plans afoot in London for a subterreanean network of bicycle lanes in old Underground Rail tunnels, we were infused with excitement. Imagine a unique underground environment where cars, buses and wound-up tourists are no longer akin to a skier’s slalom – full of obstacles to avoid.  It also has the potential for all kinds of art installations. Can you imagine a zoetrope like art work down the tunnel walls?

From the artist’s impression above you can make out the Aldwych sign which is a very short line the runs between Holborn and the Strand. It’s less than half a mile long and is often used in films as it’s a branch line with no other connections. This is an obvious contender to trial the scheme.

“The answer to making London safer and less congested for cyclists could lie underground, according to a leading design firm. Gensler has come up with an award-winning plan to convert disused London Underground routes into subterranean cycleways and pedestrian routes.

The scheme, dubbed the London Underline project, has now been recognised at the London Planning Awards where it was named Best Conceptual Project last month. Its designers say it would transform tunnels beneath the capital into vibrant subterranean streets, with shopping facilities, cafes and pedestrian paths running parallel with cycle routes.

The tunnels would be accessed via  existing Tube stations and would be surfaced by kinetic paving at stations, which would use use footfall to generate energy, according to Gensler.” – Robin De Peyer.

No immediate plans have been put into action yet as to whether / or when building will begin.