Last month whilst most of us were stuffing our faces with chocolate eggs, those in the know were celebrating the UK’s seventh annual Record Store Day. A day where music enthusiasts up and down the country get the chance for to bounce into their local independent record shop and immerse themselves in endless racks of vinyl. Most people will remember the first time they bought a record, CD or cassette, but there is now a generation of people who will only be asking their friends: “What was the first song you ever downloaded?”. That question tells us how much the way we consume music has changed. Being able to buy individual songs with ease has seemingly rendered the idea of an album defunct and with that goes the once coveted album cover artwork. Could it be for the first time music packaging is no longer a real selling point for music fans?

My personal love of album artwork stems back to the mid 80s, when I would spend what felt like hours examining the artwork of Michael Jackson’s Bad album. That fascination with the part of the music you can see has never left me. It is now ten years since I wrote my university dissertation, 10,000 words on the future of album artwork. My conclusion, drawn from the opinions of many high profile names in the industry at the time, turned out to be not too far from what actually happened.

Back then, most of the music industry was trying to figure out how to stop people sharing and stealing music before iTunes had filtered it’s way properly into our lives. The iPod was still a new concept, being thrust in our faces through the now iconic advertisements of dancing silhouettes on garishly colourful backgrounds.

The record labels may not have figured out how to stop people stealing the music but with the event of social media, they did manage to embrace the idea of sharing and turned a once feared technology used by bandits and thieves into a powerful sales tool. Choosing not to spend fortunes on marketing and publicity when the bands themselves can connect with their fans instantly.

In 2004 those in the industry suggested we would all eventually stop buying physical format music and the artwork would all move online. They predicted the album sleeve being replaced by entire sites full of pay to use content that would bring the fan closer to their idols.

Now in 2014 those ideas aren’t completely wrong. Twitter, Facebook, YouTube and Instagram let music fans engage with their favourite artists at the click of a button, however, the predicted pay to use portals never materialised. These new platforms did however create a new fan-centric dynamic, where talented music lovers can create and share their own fan art. Giving artistic power to the masses is a great way to create truly engaging super-fans who not only buy records, but also tell all their friends about their new favourite band.

It appears the future of album artwork isn’t so bleak. With the arrival of Spotify and so many of us using our phones to listen to music, the artwork has taken on a new life, one that exists in a 200 pixel square. This has created a brand new challenge for designers everywhere. We now must tell the entire story of an album or of an individual track within that one tiny square. 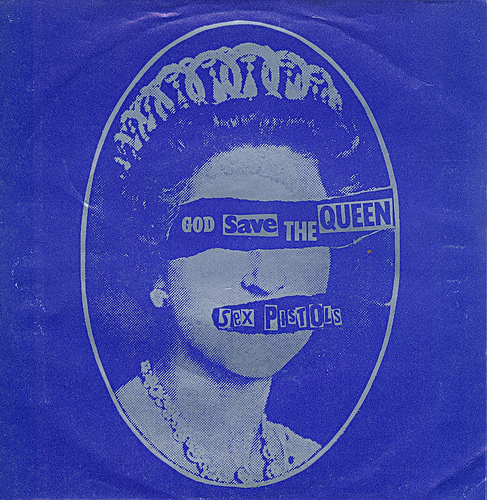 It’s not to say the fabulous traditional album artwork that is out there wouldn’t look stunning within todays modern parallax sites, imagine Jamie Reed’s iconic Sex Pistol artwork or Roger Dean’s stunning Yes album covers coming to life on our retina screens. It just seems the internet developed a ‘free for everyone’ culture that gave the music industry no reason to spend thousands on fancy websites when a simple do it yourself template can deliver the same level of exposure for artists.

Arctic Monkeys, a band who originally shot to fame as a result their online presence, seem to have hit the nail on the head with the artwork for their latest album AM. The image is striking, simple and instantly recognisable. What’s more it retains the same thumping impact on any format, from the tiny iPhone screen to the 12 inch record sleeves which will have taken pride of place in the windows of those independent music stores last month. In fact the design gives endless possibilities across all mediums, from facebook banners to full length music videos. The role of the traditional album sleeve may seem to be dwindling in importance, but it is a fool who underestimates the power of a coherent suite of branded materials created to filter into the public domain through every channel available.

The standard is set for the immediate future but what will the next ten years hold for album artwork is anyone’s guess. One thing does seem to be certain, it will only be through embracing technology and change that we will keep alive the album artwork we love.

Edited from an article at rawnet.

Posted in Silvertoad
We use cookies on our website to give you the most relevant experience by remembering your preferences and repeat visits. By clicking “Accept All”, you consent to the use of cookies. However, you may visit "Cookie Settings" to provide a controlled consent.
Cookie SettingsAccept All
Manage consent