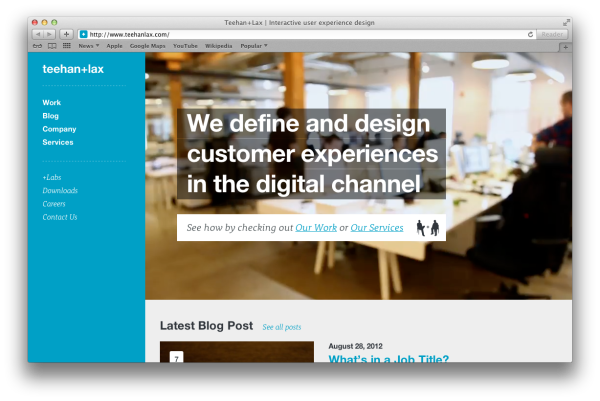 We’re not past being innovative ourselves here at Silvertoad. However, we do have role models as well, but whilst we respect them, we’re not in awe of the big boys. Like everyone else though, they had to grow and start somewhere like us. Take a look at some of the excellent artwork work that’s coming from London design agencies at the moment.  Who knows – next year Silvertoad could be featured alongside these guys? We aim to surpass ourselves daily.

Take a look at the UKs most expensive, most respected and trendsetting design agencies.

Trendsetting is not an easy task in advertising. Introducing the Top 5 Design Agencies leading the trade with extremely strong portfolios of past work, as well as proving inspiration for what’s to come. It’s humbling to see how these organisations began their ventures. Most of them have been running for decades, have blown up and shrank in size, and had complete personnel changes at the top.

Geoff Teehan began his career in digital media in 1995, working as a designer for an Internet start-up. In 1999 he joined Modem Media, the company where he’d begin working with his future business partner, Jon Lax.In 2002 Geoff co-founded Teehan + Lax with Jon. The company and its values allowed Geoff to explore experiences that transcended the computer monitor and touched customers across a broad range of devices from mobile phones to televisions.

Wolff Olins is a brand consultancy based in London, New York City and Dubai. Founded in 1965, in Camden by designer Michael Wolff and advertising executive Wally Ollins.  Wolff left the business in 1983, and Olins in 2001, though both are still active in the field of branding.

They now employ over 150 designers, strategists and account managers, and have been part of the Omnicom Group since 2001. The company specializes in developing brand experiences, creatively-led business strategies, and visual identity systems and has worked in sectors including Technology, Culture, Retail, Energy & Utilities, Media, and Non-profit. In 2012, the firm was recognized by Ad Age as one of the Best Places to Work in media and marketing.

Landor Associates is one of the world’s leading strategic brand consulting and design firms. Founded by W. Landor in 1941, Landor pioneered many of the research, design, and consulting methods that are now standard in the branding industry. Partnering with clients, Landor drives business transformation and performance by creating brands that are more innovative, progressive, and dynamic than their competitors.

With 23 offices in 17 countries, Landor’s current and past clients include some of the world’s most powerful brands, including BlackBerry, Citi, the Council on Foreign Relations, Diageo, Hilton Hotels, HP, Jet Airways, Microsoft, MillerCoors, Panasonic, PGA of America, Procter & Gamble, Taj Hotels Resorts and Palaces, and Verizon

Pentagram was founded on the premise of collaborative interdisciplinary designers working together in an independently owned firm of equals. Theodore Cosby claimed the structure was suggested to him by his experience of working on the seminal late-1950s exhibition ‘This Is Tomorrow’: “it was my first experience at a loose, horizontal organization of equals. We have brought it … to a kind of practical and efficient reality at Pentagram”. The firm currently comprises 16 partner-designers in 4 cities, each managing a team of designers and sharing in common overhead and staff resources.

The partners in each office share incomes equally and all the partners own an equal portion of the total firm. This equality, along with the tradition of periodically inviting new members to join, renews the firm while giving even the newest members an equal footing with the partners of long standing. This ‘flat’ organization (there are no executive officers, CEO, CFO or board, other than the entire group) along with the self-capitalized finances of the business, allows equal participation and control of the group’s destiny by the members.

Siegel + Gale was founded in 1969 by Alan Siegel an advertising, public relations and design-trained executive, and Robert Gale, a designer. The company was first operated out of Siegel’s apartment in New York City. Gale sold his share of the firm in 1974. In 1988, the company became a wholly owned subsidiary of Saatchi & Saatchi the global brand advertising and marketing firm. After 10 years, Siegel + Gale organized an employee buy-back of the firm.