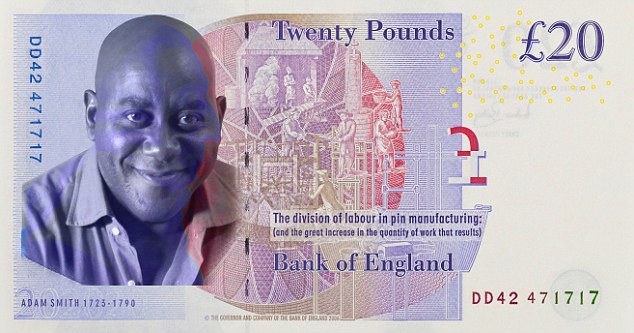 Without looking can you name the person on the back of the British £20 note? Only one of us at Silvertoad actually knew that it is Adam Smith who thought up the whole ‘division of labour’ system in the factorys of the industrial revolution.

Well it would seem its now due for a redesign, along with a new face. Everybody from Ainsley Harriot to Russell Brand and Peter Andre have been suggested. It turns out that all of these people are ‘living’ and the candidate needs to be deceased (see below), but then modern people don’t really ‘read’ that much anymore do they? Or do they?

The official website blurb implores us to choose a visual artist to celebrate British achievements in the field.

“The next £20 note will celebrate Britain’s achievements in the visual arts and we would like the public to nominate who they would like to feature on the back of the £20 note.

Visual artists include: architects, artists, ceramicists, craftspeople, designers, fashion designers, filmmakers, photographers, printmakers and sculptors.
The Bank will not feature fictional or living characters, with the exception of the Monarch, who appears on the front of our notes.”

Vote for a graphic designer like our fearless leader, Toma! We think he’d look great on a ‘twenty’!